The Aupōuri tribe was originally the Ngāti Ruanui, the original name of the Aupōuri people, for the navigator of the Māmari canoe was the important chief Ruanui.

When he and his party arrived on the shore of Hokianga they started to build their houses, and while building the particular community house, they noticed that another canoe had landed at exactly the same spot where they had landed. This happened to be Ngātoki Matawhaorua, and the high chief in this canoe was Nukutawhiti: he was also a tohunga of very high rank. When he saw Ruanui and his family group building their house he asked Ruanui to hold over the celebration of the opening of the whare. He was going to make one for himself and then, when finished, make joint celebration of the opening of the two houses. This was agreed to. But soon after, when Ruanui had finished his house, it was seen that a whale had drifted ashore. It was Ruanui who had used his supernatural powers to bring the whale ashore to feast on it in celebrating the opening of his house.

So when Nukutawhiti saw this, he became angry – he retaliated by using his powers and sang a prayer that the whale should be taken away back into the sea, and of course in no time the whale had gone back into the sea. Ruanui, seeing this, prayed hard for the return of the whale, and the two continued using their powers, one against the other, for the possession of the whale. Finally, Ruanui got the best of the duel. Nukutawhiti, displeased and disgusted, got into his canoe and sailed back to Hawaiiki.

And to this day, whenever a big meeting is held in the vicinity of Hokianga, they generally use the term: “Hokianga Whakapau Karakia”, recalling the duel between the two, when each used his own powers over the incident of the whale.

So Ruanui and his family were left in occupation of this area for some generations.

Once, close to the edge of the beach, was a pā called Maukoro. One day it was noticed that a raiding party had arrived in canoes just below the pā, when only four were on guard in the pā, the others being away. So they thought up a ruse how to defend the pā, and they bundled wīwī into bunches like human figures, using flax stalks to resemble spears.

The enemy saw this from the beach, so they began to doubt the wisdom of attacking the pā. The first warrior gave a war cry: each of the four had his war cry. The enemy, really believing a strong force was stationed at the pā took to their canoes, whereupon the four charged down and hastened their flight – four winning the battle.

From that time on the Ngāti Ruanui gradually migrated north to Pawarenga on the south side of Whangapē harbour. Now it was there that they had another battle. This time the raiding party was from the Ngā Puhi. When the enemy began the raid, the men were away fishing, just women and children in the pā. Somehow word got to the menfolk that the war party was about to attack the Mākora Pā. So they set fire to the bush surrounding the pā, creating a smokescreen by which they escaped. Under cover of the smoke and the fire all crossed the Whangapē Harbour in flight, came north, and took up all that area in Kaitāia right along to Ahipara Beach, and all those tribes in occupation there before the arrival were driven out.

They came to be known as the Aupōuri: a smoke screen – that sort of haze made by smoke and fire. At that particular time the four foremost members of the tribe were a sister and her three brothers. The eldest was Kupe (not to be confused with Kupe, the ancient explorer), a woman, and her three brothers: Whērū, Te Ikanui, and Kākati. And they represent the forebears of the Aupōuri Tribe.

As Kaitāia in those days was subject to a lot of flooding, gradually they migrated north to what is now Te Kao.

The first two who came to Te Kao were Tūpuni and Kākā, two brothers, and they were descendants of Te Ikanui of Kaitāia; the others remained at Kaitāia. They were the first settlers of Te Kao, and of course they had the habit of moving about – they settled too, very far north, round Tom Bowling’s Bay and the shores of the Pārengarenga Harbour, and generally anywhere up in the Far North. Somehow they favoured Te Kao as their headquarters; at certain times they would come back to Te Kao to attend to their plantations. This would be at the time of the first sailing ships sailing round the coast of New Zealand. Some of these whaling boats would land on the shores of the North here, and this was the Aupōuri’s first contact with the outside world – from some of these whalers they received their first firearms, clothing and liquor….

When the Treaty of Waitangi was signed the document was sent all around the country, so the time when it was brought as far north as Kaitāia, and I can name the two chiefs who signed on behalf of the Aupōuri Tribe: Wiki Taitimu and Paraone Ngāruhe….

Christianity was preached here, the Gospel taught, and with that began the establishment of the school, a hut made of raupō reeds, the first school, two to three miles north of Te Kao, at Tangoake.

“Not far from the end of the strip of sandy desert that lies at the extreme North of New Zealand, and virtually cut off from the rest of the world, live the remnants of the brave and once powerful Aupōuri, as fine a tribe as any in New Zealand. These natives are and have been for a long time, very anxious to get their children educated. They have shown their anxiety by taking the thing in had themselves, by putting up a whare at Te Kao and paying a teacher. When I visited the place, I found that forty-two young people were being taught in this whare (which would probably accommodate fifteen or twenty properly), while many more would have been at school if by any means they could have been squeezed into the building. The natives generally showed the greatest of enthusiasm about the school and its success. Tenders for suitable buildings have already been called for. There is reason to believe that this will one day be one of the best Native Schools in New Zealand.” (From the files of the Education Department, Auckland 1882)

So began Te Kao Māori School, the most northerly school in New Zealand 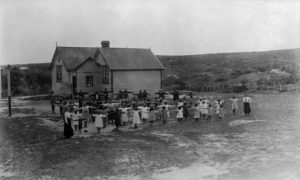